On THIS day in 2008, Nephew Aaron and I began REHEARSING our show that would become Aunt Dottie's Sing-along Cabaret. We sang through TONS of music in that first rehearsal -and threw MOST of it out! It was Broadway stuff, the stuff I'd been singing on the cruise ships and I wanted something NEW. So . . .  we switched to the music we love: ROCK N' ROLL (with a whole lot of peace and love thrown in!)

I hope you'll SAVE THE DATE and JOIN us for our 5th Anniversary show! 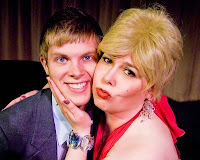