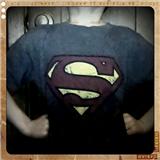 Have you seen the movie “The Incredibles”? It’s about superheroes having to hide their true identities; having to hide their specialness because the world doesn’t want any “supers”. The two parents are dealing with their son acting out in school because he cannot show his true self. The father is very excited because the son is using his super-powers in his mischief. The mom is just trying to get the whole family to “fit in” and behave like “normal” people. As the two superhero parents argue about their son’s bad behavior, they have this exchange:

Bob doesn’t finish that comment but, I know how he feels. I was tutored with all the other circus kids and only went to public school for a few semesters in 5th grade and it was a LONG time ago; but, talking with my Nephew Aaron I’ve learned this is pretty common. Everyone gets a prize. Everyone gets an award.
In the circus, we all had our individual identities. We all had those things that we were SUPER at that no one else did quite as well. That was OKAY! If someone was better at something that we also did, well, heck, we KNEW we’d better PRACTICE more so we could beat them! A little healthy competition was okay.
I like what Marianne Williamson said on this topic: “Your playing small does not serve the world. There is nothing enlightened about shrinking so that other people won't feel insecure around you. We are all meant to shine, as children do.”