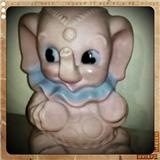 So, the website fairies just found my little story that I wrote for Friday the 13th! So, I'm sending it back to YOU!
When I was growing up, in the circus, there was a beautiful tightrope walker named Zelda. She collected elephants; her little travel-trailer was FULL of elephants glued down to every shelf and each one HAD to have the trunk UP. “For luck,” she’d say.

One day, a fan gave Zelda an elephant with the trunk down, and she got very upset; she was sure that trunk-down-elephant would give her bad luck. She was so distracted by it that when we were driving down the road she wasn’t paying full attention and drifted off to the side and her travel-trailer broke free and tumbled down an embankment. Zelda was CERTAIN that the trunk-down elephant was to blame and didn’t even notice the GOOD luck that kept her truck ON the road, despite the loss of her trailer.

She became despondent; convinced that she'd been cursed with bad luck and stopped practicing each day. She’d do a quick run-through before the show but that was it. Her show got very sloppy and she had many near misses. One day she fell and broke her ankle. She still blamed her misfortune on that trunk-down elephant. She gave up the circus and I only saw her once again, years later. She was, of course, “Down on her luck."

Me, I like what the great Lucille Ball has to say about luck:

"I don't know anything about luck. I've never banked on it, and I'm afraid of people who do. Luck to me is something else; hard work and realizing what is opportunity and what isn't."

Happy day, my friends! I love you all! ~Aunt Dottie